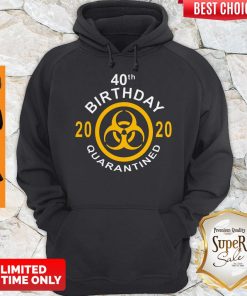 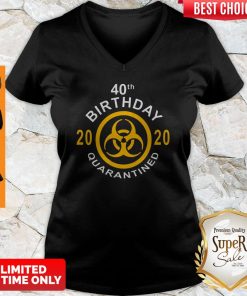 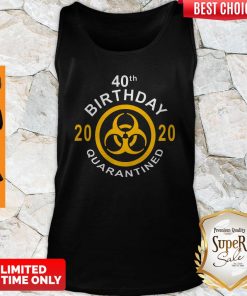 That’s not freedom. It is not liberty when our government makes us choose. That’s slavery to a broken system. I know this issue isn’t particularly about race, but it just goes back to the idea that these ‘Murcia Morons think they are above everyone else until the Official 40th Birthday 2020 Quarantined Shirt. I would say patriotism and nationalism are not the same things at all. These guys who are protested are confusing patriotism with nationalism. They are patriotic only in name because, in reality, they don’t care about the country or seemingly other people. They thing wear a shirt with a flag and carrying around a flag somehow makes them patriotic but they just look silly.

Also, how the hell does somebody think their rights are being subdued or whatever when they are openly protesting in a broad day without facing any repercussions? How does that level of irony not freeze their brains? I get why people are so fed up with this bullshit, I certainly am, but I really don’t like people acting like “stop tolerating their bullshit” is somehow productive. Telling Trump supporters that they’re just uneducated, ignorant, an Official 40th Birthday 2020 Quarantined Shirt. It is a phenomenal way to make sure that they’re at the polls voting for him. And that they remain in that part of the political spectrum forever. It’s some of the most effective GOP campaigning imaginable. I get that.

But doing the opposite has allowed the GOP to run over this country, from blocking Merrick Garland to allowing Russian interference, etc, etc. Being the only grown up in the room is losing. Obviously this isn’t the popular opinion on Reddit, but I completely agree. I’m not sure what happened to compromise in the Official 40th Birthday 2020 Quarantined Shirt. Being bi-partisan used to be something to be proud of. People identify with political parties now like they would a tribe. As if these rich a-holes they support give a fuck about them.  Condemning one side or the other accomplishes nothing. What do you mean what happened to compromise?